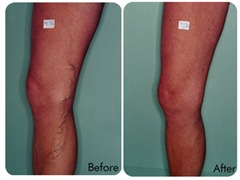 Minimally invasive procedures have been the trend over the past decade, as they accomplish the same goals more easily, thus allowing patients to resume their normal activity more quickly.

This has been the case, as well, with regards to vein surgery. Ligation and stripping had been the "gold standard" for a long time, and for more than a decade has been supplanted by endovenous thermal ablation, either utilizing laser or radio-frequency.

This "no incision" procedure, is performed as an in office procedure using local anesthesia and "twilight" intravenous sedation. It takes less than an hour to complete, and within ten to fifteen minutes after the procedure, the patient is ready to go home. 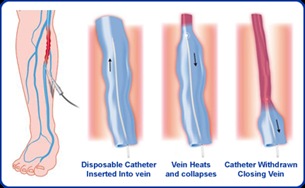 How is endovenous laser ablation performed?

After Using local anesthesia, the vein is accessed at its lowest point, with a small needle. A laser fiber, less than 1/2 mm in size, is then threaded into the vein, and using ultrasound, it is guided to the termination point of the vein. Once there, saline solution is infused over the course of the vein. This compresses the vein, so that the laser fiber is in direct contact with the inner lining of the vein.

The laser is activated, and it seals the vein as it is withdrawn, thus solving the varicose vein problem. The entire procedure is performed under direct vision utilizing ultrasound, so that the process can be followed. This increasing its safety. A band-aid is placed over the puncture site, and a compression stocking is placed to aid in the healing process.

This has become the new "gold standard", as it removes the vein from the circulation, without physically  removing it from the body. No general anesthesia, no incisions, and a quick return to daily activities.

If you are interested in learning more about endovenous laser ablation for varicose veins, contact our office for a consultation.