Historically, this was the “gold standard”. With the advent of Endovenous procedures (see below), it is seldom necessary.

An incision is made in the groin, or behind the knee (depending which superficial vein is abnormal) and the Saphenous vein is tied off at its origin. Other incisions are made further down the leg to allow for the removal of the entire vein. At the completion of the procedure a compressive bandage is used to wrap the leg, which stays in place for a few days.

The procedure is performed using general anesthesia in a hospital operating room as an outpatient surgery. Patients are encouraged to ambulate as much as possible that same day. Airplane travel is not allowed for two weeks after the procedure.

» Contact us for more information on Vein Ligation and Stripping

Endovenous Laser Ablation | Manhattan | New York City (NYC)Endovenous laser ablation of the Saphenous vein is a minimally invasive, in office treatment alternative to the surgical stripping and ligation (see above). In this procedure the vein is sealed with thermal energy, instead of removing it. The outcomes are the same, but it does not require general anesthesia, or any skin incisions.

To ease the anxiety of the patient, intravenous sedation is used. The vein is mapped using ultrasound, and the skin at the decided entry point is anesthetized with local anesthesia. Under ultrasound guidance the vein is entered with a small needle. Then a small laser fiber, less than ½ mm, is inserted into the vein and guided to the top of the vein. The vein is then compressed with fluid to allow the laser fiber to engage the vein wall. Laser light is then continuously fired, causing the vein to collapse and seal shut. Many note an immediate relief of symptoms, with little or no pain.

The patient is encouraged to walk immediately, and is able to return to work the next day. Exercise routines may be resumed in a few days. For safety purposes, patients are asked not to fly for at least two weeks after the procedure.

Complications are rare, but may include thermal skin burns or transient numbness.

The success rate of the Endovenous laser procedure is equal to that of the ligation and stripping procedure, and is quickly becoming the new “gold standard” for the treatment of varicose veins.

» Contact us for more information on Endovenous Laser Ablation

This procedure is used to remove superficial varicose veins. Small 2-3mm skin stab incisions are made over these veins, and the vein is “teased out” with fine forceps. Since the incisions are so small, they leave an imperceptible scar. The skin incisions are closed with a butterfly (steri stripe) bandage. To obtain the best cosmetic result, the incisions are limited to the larger veins, and perhaps sclerotherapy (see next page) will be necessary as a follow up after the wounds have healed. At the completion of the procedure a compressive bandage is used to wrap the leg, which stays in place for a few days. 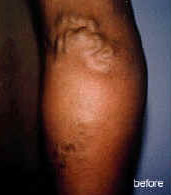 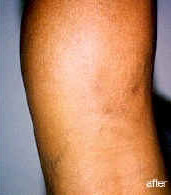 The procedure is performed, using intravenous sedation and local anesthesia, in a hospital operating room as an outpatient surgery. Patients are encouraged to ambulate as much as possible that same day. Airplane travel is not allowed for two weeks after the procedure.

This is used to treat spider veins or reticular veins. It is accomplished by injecting a liquid chemical into the vein, irritating the wall of the vein and causing a fibrosis. Sclerosis is a Greek word, loosely interpreted means to glue, so we are gluing the vein walls together so that the vein will no longer be noticeable. Two chemical agents are FDA approved in the United States, Polidocanol (Asclera- Merz Aesthetics), and Sotradecol (Angiodynamics). A tiny 30g needle is used to make a small puncture into the vein. Special lighting with magnification is used to most accurately enter the vein. Veins below the skin surface (reticular veins or feeder veins) are visualized by using Veinlite (infrared light) to pinpoint the injection sites.

Foam sclerotherapy, liquid chemical mixed with air, allows for the treatment of larger sized veins. The air displaces the blood in the vein, “emptying” the vein so that the liquid can irritate the vein wall. Similar lighting, as mentioned above, is used.

Ultrasound guided sclerotherapy, liquid or foam, may be suitable for treatment of some superficial varicosities. 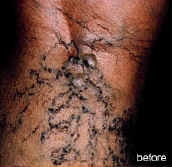 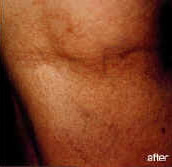 Post treatment compression stockings, 20-30mmHg, are worn for 48 hours to aid in the healing process. Airplane travel is discouraged for about a week. It is best not to do this procedure when you are freshly suntanned, or for at least 2 weeks after, to avoid permanent hyperpigmentation. Occasionally hyperpigmentation may occur, but will usually resolve with time.

There is a healing process, and the results are usually visible within 3 to 6 weeks. Very often the areas will appear to be worse before they look better.

The most common reason that patients develop spider veins is hormonal, and thus sclerotherapy will treat the current veins, but will not prevent new vein development.

Also known as lower extremity duplex scan, it is a combination of sonography and Doppler. It is a noninvasive sensitive and specific test that allows for the detection of venous thrombosis (blood clots in the veins of the leg), or faulty valves in the superficial veins that are causing varicose veins.

The ultrasound is performed by using a transducer probe which is placed over the lower extremity. A clear warm gel is applied to the targeted body part and the transducer is moved across the area to visualize the internal images. It is usually done with the patient in the supine position, but may be done with the patient standing to allow for the most precise evaluation of a faulty valve in the vein. You will see the images on the screen in real time, so that you and the physician can review them together.

It is essential to mapping out the abnormal vein that will be treated, and it allows for the placement of the needle and or laser fiber into that vein to ensure its accurate treatment.

» Contact us for more information on a Venous Ultrasound

The VeinGogh Ohmic Thermolysis System provides a superior solution for the treatment of fine telangiectasia, spider veins and small angiomas, especially recalcitrant vessels that have shown a resistance to sclerotherapy, laser or IPL treatment. VeinGogh is considered the fast, easy way to reliably treat these and other aesthetically unacceptable conditions, often with less discomfort compared to older versions of therapy.

While other light-based solutions are expensive, skin-type dependent and have an inherent risk of injury, VeinGogh uses a thread-thin, insulated probe to thermocoagulate and instantly eliminate vessels dependably, repeatably, on any skin-type and on any part of the body.