One of the scariest varicose vein related issues is the sudden onset of bleeding.  The bleeding episode may be the result of a local trauma, or more often than not it may occur spontaneously.  It is very dramatic as the bleeding is profuse and pressurized to the extent that some patients have described it as “a geyser eruption”.

The most common location is at the area of the ankle, where the venous pressure is at its maximum.  Veins return blood flow, and it is at the level of the ankle that the process begins. 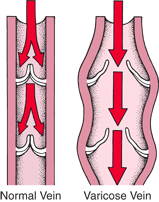 It is usually the “spider veins” that bleed, as the top layer of these veins is right under the surface of the skin.  Dryness of the surrounding skin will predispose to a bleeding episode, so moisturization of the skin is of great benefit.  In the colder months there is a greater potential due to the frequent temperature changes, from being outdoors in colder temperatures, to indoors in warmer temperatures with higher humidity causing increased dryness of the skin.  Yet, even in the warmer months, the increased humidity may course dryness of the skin, and again the potential for bleeding from these varices.  Very often people report that the bleeding occurred while showering or bathing, or even after exiting a swimming pool.

Larger, bulging varicose veins, rarely bleed externally, as the outer layer of the vein is deep to the skin, and therefore protected.  These veins main complication is potential for blood clots or thrombophlebitis.

What to do if the vein bleeds 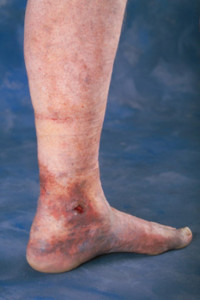 These measures will usually control most episodes of bleeding.  But, if after several minutes, the bleeding continues, please call 911 or any emergency medical system, as rarely the bleeding can be so excessive to potentially cause you to go into shock.  At the emergency room or urgent care center a compression bandage most likely be applied, or often times a suture may need to be used to control the bleeding, at least temporarily.

Evaluation of the venous circulation will be the next appropriate step.  If there is underlying varicose vein problems then that would need to be addressed, perhaps with an ablation procedure (this has been addressed in a previous blog).  If there is no evidence of underlying venous abnormalities, then local care-sclerotherapy-to seal the surrounding veins would be of benefit.  Even in those patients who have an underlying varicose vein problem, local sclerotherapy to temporize, until more definitive therapy is done, would be of benefit.

If it is recommended to you to wear a compression stocking, remember to place the stocking on the leg before it is dependent, and place a Band-Aid over the area of the bleed, to protect the formed scab, from being irritated by the stocking.  It would also be advisable to maintain a Band-Aid over the area of the scab while sleeping, so that bedsheets do not irritate the area.  As mother use to say “don’t pick at the scab”, because doing so will start the whole healing process all over again.

← What Stocking Should I Wear?
Skin Care During Winter Months →